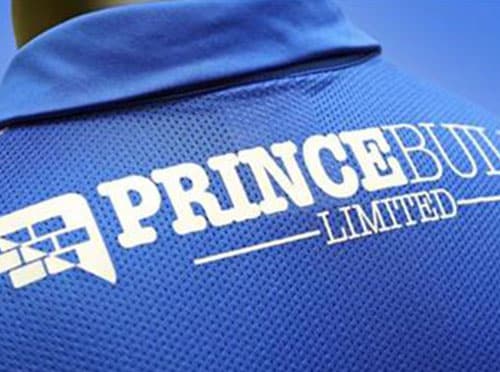 Princebuild have signed a new three-year deal to continue the ‘back of shirt’ sponsorship and also launched a new competition to win fantastic prizes!

We are delighted to announce that a new three-year deal has been agreed to continue the ‘back of shirt’ sponsorship.

The deal will continue to see the company’s name and logo emblazoned on the back of the team’s home and away kit, as well as on various advertising boards around the stadium.

Director Jonathan Pudney said: ‘We’re really pleased to be continuing our sponsorship with the Club and the three year signing affirms our belief in the future success of the team as well as our commitment to continuing to support business within the community.’

Posh Commercial Manager Alex Harris said: ‘We first entered into a partnership with Princebuild for the back of the shirt sponsorship at the start of the 2013-2014 campaign and we are very pleased to sign this new deal to take us to the end of the 2017-2018 season.

‘I would like to thank the Director’s and staff at Princebuild for their continued support and look forward to working closely with the company over the next three years.’

As part of the new sponsorship deal, Princebuild have launched a brand new competition to win a whole host of Peterborough Unprizes and this month, a signed home shirt is up for grabs and all you have to do is identify the Posh star.

A member of the Posh squad has been filmed at the Mick George Training Academy in a covert way – all you have to do is name that player by viewing the clip above or on the Posh YouTube channel! To enter, email posh@princebuild.co.uk with your guess, name and contact details.